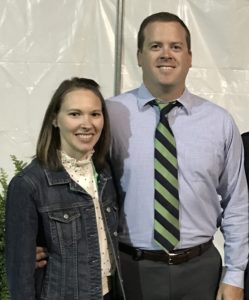 Nathaniel B. Brown was born October 30, 1982 and was raised in Russell County, VA while attending Spring City Baptist Church. He was born again on May 21, 1991 under the pastorate of Br. Brent Logan. He graduated Lebanon High School in 2001 and attended Virginia Polytechnic Institute & State University, receiving a Bachelors of Landscape Architecture from the College of Architecture + Urban Studies in 2006.

While at Va. Tech, the Lord allowed him to co-found a campus Bible study, Valiant for Truth, that was sponsored by Pastor Greg Irby of Temple Baptist Church in Salem, VA. Also while in college, he attended Auburn Baptist Church in Riner, VA under the leadership of Pastor Stanley "Shake" Smith where he was afforded the opportunity to teach the College / Career (C/C) Sunday School class and a C/C Bible Study on Wednesday nights.
Following college, he moved to Charlottesville, VA to work in the Architecture / Engineering industry. He attended Colonial Baptist Church, Pastor Ed Leake, and was given opportunities to serve in the bus ministry, puppet ministry, Sunday night Teen Bible Study (Teens for Christ) and the church's weekly door-to-door and street preaching ministries. During these years, Lt. Col. Henry Parrish, US Marine Corps, became a close friend and mentor in the work of the ministry, and along with Pastor Leake, these two men made a positively profound impact upon his life and future direction in the ministry. He also met and married his wife, Valerie, on September 12, 2009, while attending Colonial Baptist Church. He and his wife then attended the Eastern European Institute of the Bible, directed by Br. Brent Logan and Br. Gerald Sutek, in Brasov, Romania during the summer of 2010.
In the fall of 2010, the Lord directed their family through a job transfer back to Spring City under the pastorate of Br. Scott Suttle. He was given the opportunity to teach the Teen Sunday School and Wednesday night Bible Study classes while directing the door-to-door ministry and serving faithfully in the other varied ministries of the church. In August 2012, the Lord blessed him and his wife with a beautiful daughter, Abigail.
In the summer of 2013, the Lord once again changed his direction in the ministry and led him to become the next pastor of Spring City Baptist Church as Br. Suttle's family announced their burden to take the gospel to the Scandinavian region of Northern Europe.
We ask that you pray for our Pastor and the church according to 2 Thessalonians 3:1-2...
Finally, brethren, pray for us, that the word of the Lord may have free course, and be glorified, even as it is with you: And that we may be delivered from unreasonable and wicked men: for all men have not faith.